Can you really sell pick-and-mix online? The Laberlarven webshop gives you the answer here.

Every cloud has a silver lining. At least that’s the case with the webshop Laberlarven: they turned COVID-19 into something positive.

Frederik Schnell, Nikolaj Lynge and Peter Rytter are the names behind the webshop, which has everything from sweet to sour, liquorice and chocolate, to name just a few of the large selection. Frederik and Nikolaj both have work roots in the world of nightlife, which, like a lot of other things, was shut down by COVID-19 in the spring of 2020. The long working hours had now been replaced by a lot of free time, and they quickly realized that the reopening of the clubs was a long way off. But one day Frederik had an idea.

He saw on Facebook that a candy store was having trouble selling its candy. People wouldn’t buy the candy because of COVID-19. The candy was therefore going past its expiry date, which prompted the owner to offer to mix the candy for people and send it straight to their door. The post received several thousand comments, which indicated an unexploited potential opportunity to Frederik: could it really be viable to sell pick-and-mix online? He investigated the possibilities.

Shipmondo has clearly helped us to get started quickly, as the user-friendly system allowed us to quickly send the first orders and in that way get our idea tested,” says founder and co-owner, Frederik Schnell.

From boy’s room to warehouse

Nikolaj was skeptical when Frederik told him about the idea, but when they researched the market and contacted various suppliers, Nikolaj realized that it really was a good idea. They teamed up with Peter, who is the man behind the screen and in control of all the technicalities, and then the journey began to go full steam ahead.

We started bringing home boxes of sweets of all varieties, because we didn’t know anything about what could work and what people would like.

They moved the candy stock into Frederik’s old 8-square-meter room at his parents’ house in August, but in just two months they grew out of the space. They then moved out to premises outside Aarhus, where they had 275 square meters to play with. Six months later, they are also on the point of growing out of these premises, and so they are once again looking for new, larger facilities. Their crew has expanded to 30 employees, who all help with packing and shipping the orders. 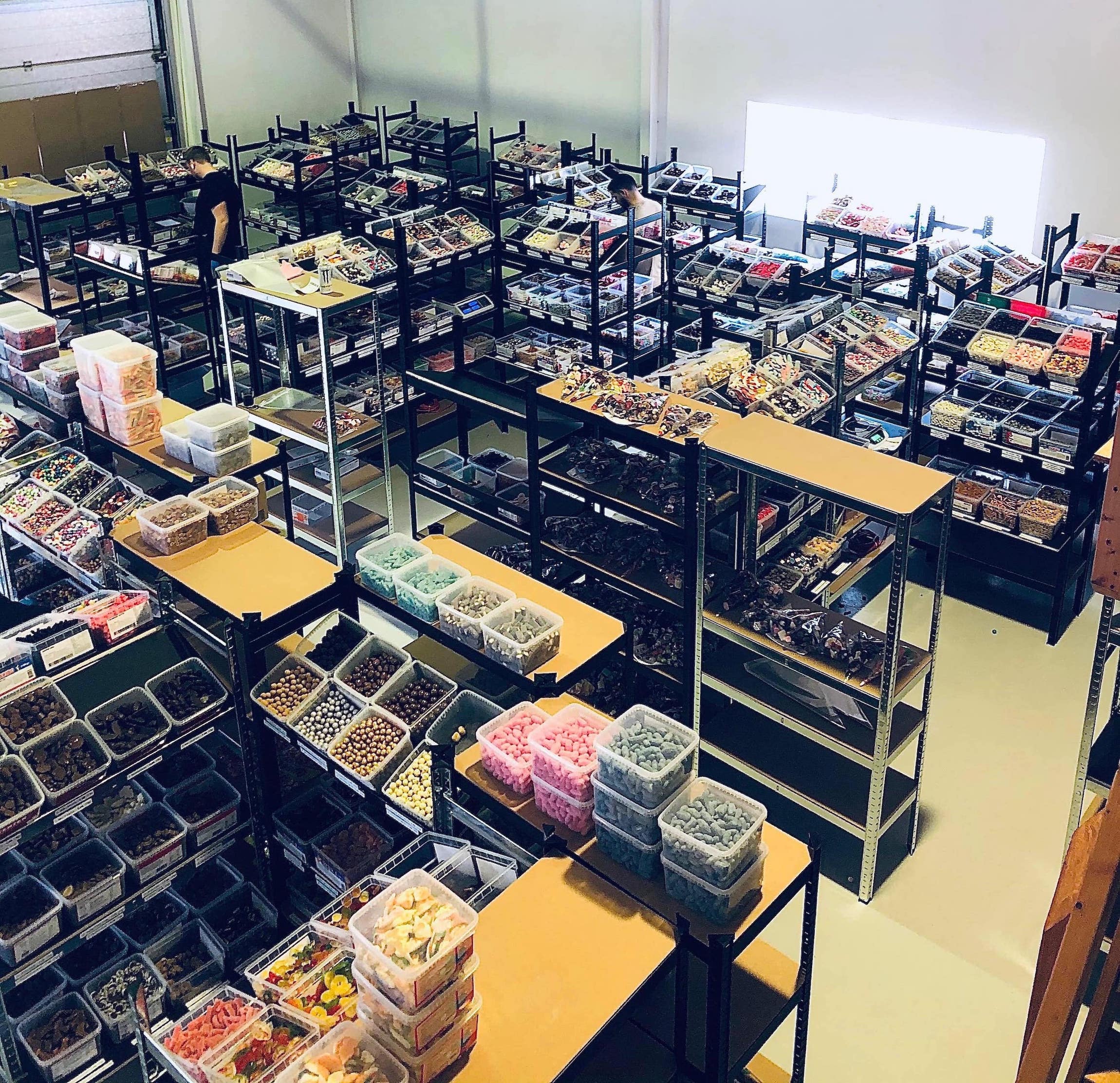 The Laberlarven concept of selling pick-and-mix online has proven to be a remarkable success. Today, they pack and ship an average of 500-600 orders every day with Shipmondo, which has been a part of the journey from the beginning. Recently, they have experienced 1,100 orders in just one day. Their biggest challenge has been that they have not been able to keep up with demand, which is why they have had to hire a lot of employees in a short time.

It has been a challenge that it has exploded a bit out of our hands, but that is, of course, only positive. Shipmondo’s efficient order handling has made that challenge much easier, Frederik says.

So, they have benefited from using Shipmondo, which automates and streamlines the daily workflow. Frederik says that it has been of great importance for their start-up that Shipmondo is so user-friendly, as it makes it easy to train new employees for both the system and the picking and packing process. At Laberlarven, the work process is a two-stage process that involves only picking and packing; Shipmondo manages everything else. The process consists of:

It is a manageable process that makes the orders easy to handle. Laberlarven has integrated their WooCommerce webshop into Shipmondo order management, from where they handle their shipping. Efficient order management can save a lot of time and reduce possible errors that can happen when things are busy, as is the case at Laberlarven.

He also says that, if they have experienced problems with the technology, they have benefited greatly from the ability to call Shipmondo’s customer service, which they greatly appreciate. It can always help, whether it’s with technical issues or just questions.

In addition, the integration with the website and the freight platform in itself is just so delicious to work with," says an enthusiastic Frederik.

The value of fast delivery and multiple carriers

Because candy is often bought impulsively, delivery time is an important factor for Laberlarven and their business. The delivery time is one of the first things you see on their webshop, where they highlight that they offer fast delivery. The same goes for several of their landing pages, where they have added the delivery time repeatedly, so as to emphasize the importance of customers being able to get their candy on time. See their Danish website here: 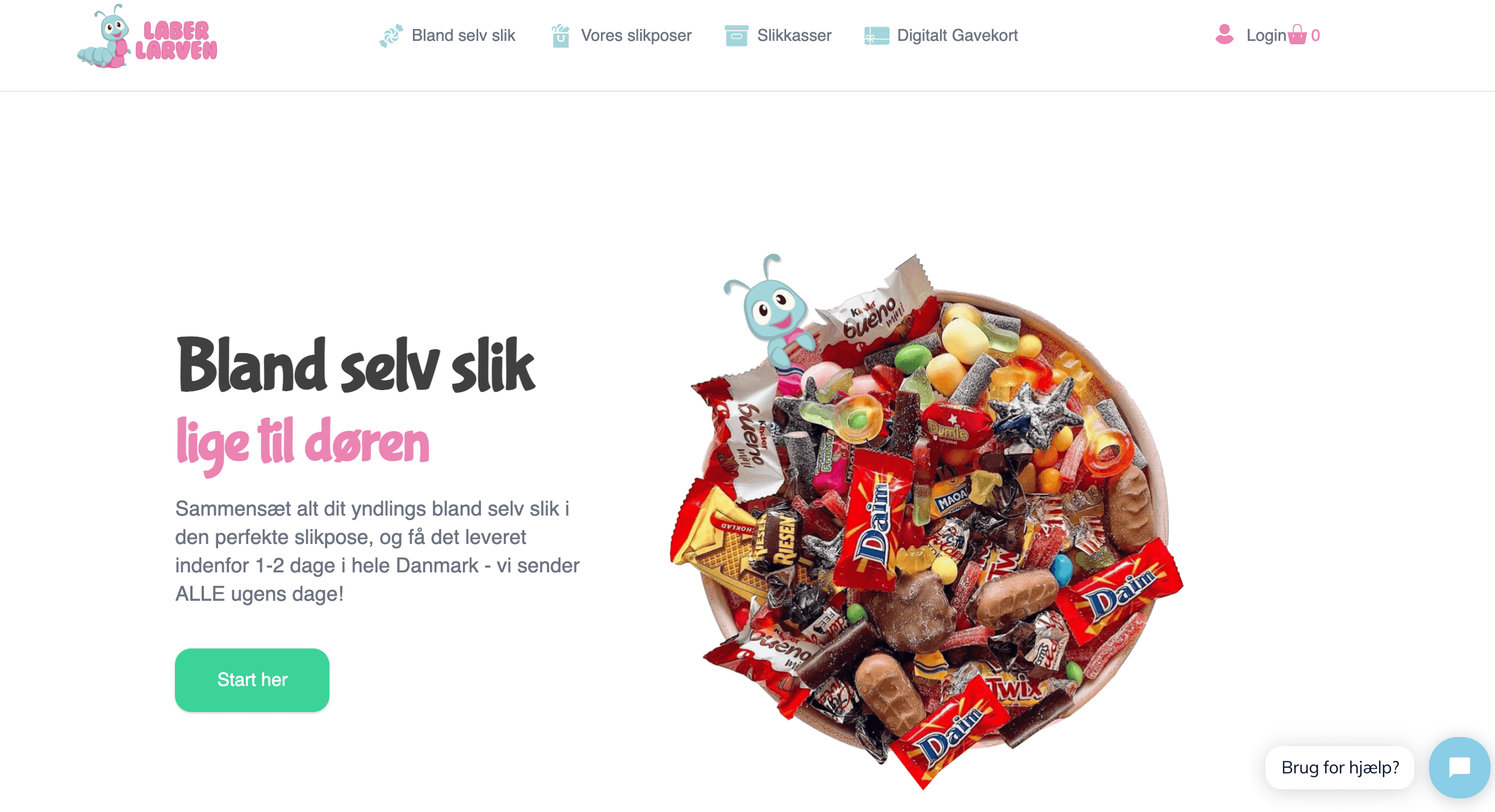 Good customer experience is when the customer orders his goods, and they can be there shortly after. Speed and delivery time are crucial for us, says Frederik.

For this reason, they have made alliances and shipping agreements with several carriers, so they can ensure a fast delivery time for their customers. Laberlarven offers delivery the same day, if you place your order before 11 am or 3 pm, depending on the city. This is possible with the carrier Burd, which delivers in the evenings between 6-10 pm. In addition, they also have their own shipping agreements with the carriers GLS and dao, both of whom can give their customers greater freedom of choice in choosing exactly the delivery method that suits them best. This helps to make for a good customer experience. Especially during COVID-19, Laberlarven’s experience indicates that it’s the very small things that count, such as that you can get your candy on time.

At the checkout, they describe exactly which carrier can offer what, so that freedom of choice is created for the customer. Transparency and useful information help to make a good customer experience. See how they have done it on their Danish site below: 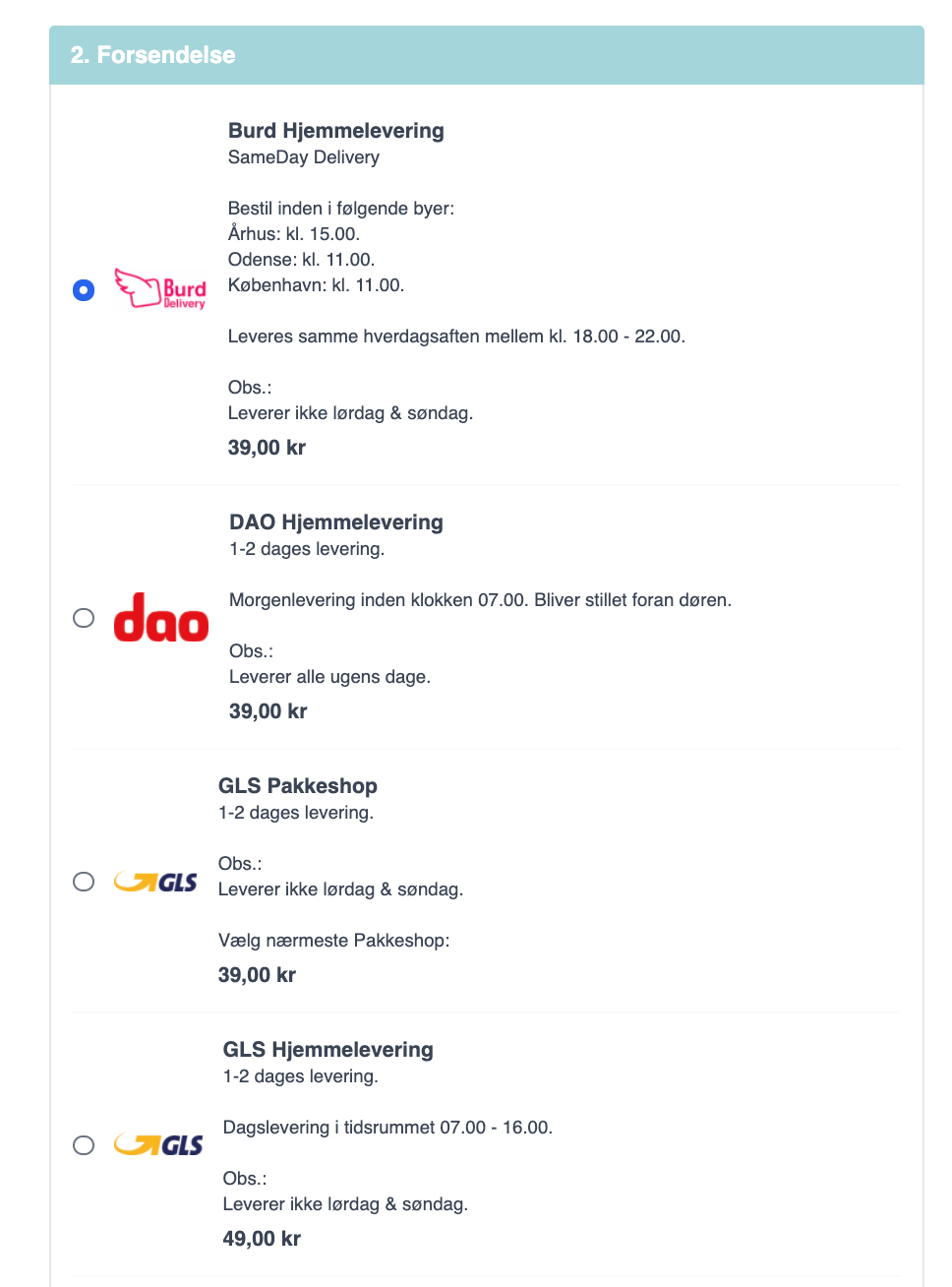 In the Shipmondo app, they make use of Shipment Monitor, where they can keep an eye on whether the packages have been delivered by checking the list of ordered shipments. The shipments are all marked with a color indicating their status. Frederik says that this allows them to follow up on their customer service and track & trace.

I actually don’t know what we would do without Shipmondo, or how else it could be done. Shipmondo has been involved from the start, and it’s a system I would definitely recommend to others, says Frederik.

In the future, they aim to be able to deliver throughout Denmark within a few hours, so that they can start competing with the physical stores as well. Frederik believes that more warehouse locations, for example in Denmark’s various big cities, may be the way to achieve this. In addition, they plan to investigate whether there are other carriers that can deliver faster in certain areas.

The foreign adventure of the future

The big dream for Laberlarven is to expand abroad. Frederik says that they already have a few orders a week to be sent to Danes abroad, including Germany, Poland and Spain. Here, too, Shipmondo is used to find possible solutions for shipping to these countries, as it is possible to ship to the whole world. Even if you do not have a freight agreement yourself, you can simply use Shipmondo’s already-existing agreements.

Frederik says that the Nordic countries, especially Sweden and Finland, have a large number of people with a sweet tooth, so they could be interesting markets to enter. But, for now, they are taking one step at a time and are just happy with the great success they have achieved in such a short time.

Good advice from an entrepreneur

If, like Frederik and Nikolaj, you have a good idea that you have a hard time getting started with, Frederik’s advice is:

Just go for it. If you have the right competencies or acquire them in a partner, and you secure great agreements that can give you the best solutions, then you have already gone a long way.

He adds that you can often rethink the whole thing too much, and set barriers for yourself before you even get started, so that, before you look around, someone else has overtaken you on the inside and executed the idea. So he believes that it is important to just dare to go for it, and take it as it comes - of course with a plan, but also with a realistic approach that the plan can and will change a lot during the process.

If you want to read more exciting cases with companies that Shipmondo have helped with their shipping challenges, you can read, among others, about how to design your own solution through API like the webshop Curvii, or how to handle orders from as many as nine webshops in the same system with Zerv. You can also find all our other cases right here.